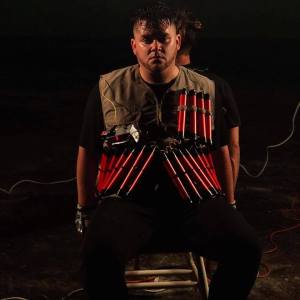 Random Tanner is a hip-hop artist who has held his own while representing Clinton, Iowa since the beginning of his career. He has been heard on various radio stations, including Eminem’s Sirius XM station, Shade 45. His resume speaks for itself.

Now, I had an amazing opportunity to sit down with this musician who’s re-emergence exploded in 2018. We talked about his presence in the hip-hop community, the changes with his current brand, who he would love to collaborate with, as well as, future plans and goals going into 2019 as Random Tanner.

Back in 2014, when we first met, you were going by the stage name of Skeez. Even though you built a successful platform through that name, you decided to change your branding to the name of Random Tanner in 2017. What influenced that change?

Random Tanner: Plenty of things influenced the change and transition from Skeez to Random Tanner. One, being that I was tired of the word “Skeez” being so unrelatable to who I was as an artist. Another huge reason was wanting to be more marketable and searchable. By that, I mean that when you google search “Skeez” I was a tiny fish in a huge sea.

When you search “Random Tanner” I am the only thing that pops up so it just made so much more sense. I think people have really taken to the name change well, especially the entire new fan base I’ve gained over the past year & a half. I’m honestly not sure the majority of my supporters even know I was anyone besides Random Tanner.

What’s the story of how did the new name come about?

RT: I linked up with a long-time music friend, DJ K Yung, and we decided to ink a management deal. She helped me make the decision as did my family and a few other close music friends. It actually took a while for me to pull the trigger but when I did, I had an amazing response from my followers so it made it a lot easier.

What is the difference between the persona Skeez and the new persona of Random Tanner?

RT: I don’t think I’ve really changed because of the name change. I think when I was finally ready to change the name, I decided that I was going to go all-in with it which has really been an enormous change, if that makes sense.

This process has always been a growing experience and I invested way more time, energy and money into the new brand, Random Tanner. I have an officially merchandise line. I am always trying to be innovative and creative when it comes to pushing my name. To me, Random Tanner is a direct reflection of who I’ve always wanted to be as an artist.

Along with the name change, the message in your music has shifted. What’s allowed you to be more open and vulnerable in your music? What sparks or influences the topics and passion you have put into your art recently? Has that influence or spark changed from the past material under Skeez?

RT: I don’t think the message has really shifted in my music. I think my outlook on life has matured though. I’ve always talked about things that are important to me, but finally connecting with the right producers, engineers, and support system has been a major influence on the quality of music and image that you’ve been hearing and seeing lately.

Looking back into this year, you’ve released five singles so far, “Clockin’ In”, “Go Away”, “Back When We Were Kids”, “M-80”, & “Here For You.” Which of these singles were your favorite to produce?

RT: My favorite song that I’ve put together out of all of these is probably “Here For You” with “Back When We Were Kids” being a very close runner-up. They both feature Alex Fischbach but “Here For You” has singing from me in it along with a proposal in the music video to my fiancé!

A pause in the interview to share the song “Here For You” and beautiful music video! A huge congratulations to RT & Liz! Such a beautiful proposal! 🙂

Now back to the interview…

Which of the new singles are your favorite to perform live?

RT: This answer always depends on the crowd that I’m performing for. My most consistent song out of all of these to perform has been “Clockin’ In”, because it’s the first single I dropped. I really love performing “M-80” as well though.

Do you still perform songs from the Skeez era? If so, what are your favorites to perform?

RT: This question is funny, because my DJ, DJ Smokey, was just trying to tell me that I should perform one of my “Skeez” songs, because it gets crowds super hype. While I do agree, I told him that it feels like a step in the wrong direction to perform music that isn’t available anywhere for people to stream, download, or buy. Plus I wanted to completely “shed” everything Skeez when I transitioned.

Over the past decade as a recording artist, what is the most (bad or good) you have gotten out of the experiences?

RT: Being a musician, especially a hip-hop artist, is one giant roller coaster of emotions, successes, failures and all of the above times 100. I have lost friends, gained friends, seen things that no one else will get to see, experience the times of my life and more. There are definitely bad memories, but in no way, shape, or form do they outweigh the good memories. Every single part of this journey has been worth it to me and that’s one of the main things that keeps me going.

You have an astounding resume when it comes to live performances with some heavy hitters in the hip-hop industry. Which of the artists you’ve performed with was your favorite over the years? Who would you want to perform with again in the future?

RT: I have two artists who were my favorite to perform with. Machine Gun Kelly and Tech N9ne are hands down the best two shows to be a part of. I’ve opened for MGK four times and Tech N9ne three times and the crowds that show up to those concerts are beyond supportive of the music, including the openers. The biggest deal to me is rocking for a crowd who actually is there to possibly become a fan of you. I would want to perform with both of them as many times as possible in the future until I can start headlining shows that bring in 1,000+ people on my own!

Who have you not yet collaborated with musically, that you’d love to work with? Should we expect more collaborations with you & Jon Young in the near future?

RT: I’d love to collaborate with Tech N9ne, Rittz, Twista, NF, Witt Lowry, Kevin Gates & so many more. Honestly, I’d collaborate with any big name if it fits my message and makes sense for both of us. Yes, actually I have a song on my upcoming album with Jon Young called “Never Be” and it’s exactly what our fans would want to hear from us together.

RT: Yes, I will be dropping my “debut” Random Tanner album this year entitled “Fast Forward” which will feature all of my recently released songs plus more. 2019 is going to be filled with all kinds of things that I’ve never accomplished as an artist. A lot more traveling, touring, festivals, strategies and hard work! I honestly can’t wait for whats to come!

Do you want to expand beyond music with your brand in the future?

RT: I don’t think I’d really be all the way in with my brand if it didn’t involve music. Music has been so good to me over the years and has morphed me into who I am as a person that I’d feel guilty trying to force the brand on people if I decided to stop music. If that time does come, where I call it quits, it will be at a point of self-appreciation. A point where I can say I did every single thing that I wanted to and I am truly happy with everything I did with it. At this point, I don’t regret any part of it. With all of that being said, I want to say thank you to everyone who has ever supported me and to everyone who has yet to find out that I exist, thank you in advance!

H.M. Gautsch aka Marie is an Award-Winning filmmaker & producer, a critically-acclaimed author & poet, and a freelance photographer. She also strides her writing skills as an entertainment blogger where she blogs artists' interviews, film reviews, and anything that touches on any topic relevant to the multi-media field, along side with her poetry and philosophy to keep her vision fresh.