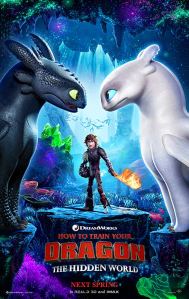 The third installment of How to Train Your Dragon was a huge disappointment in my view. My expectations for the closure of the trilogy and Netflix series was high. The story felt rushed and for me the comedy itself was lacking in The Hidden World.

It hurts to write this as How to Train Your Dragon is one of my top favorite animations, because who doesn’t love a good story on dragons and vikings?? I was even a fan of the series on Netflix!

Come to think of it, this story-line would have been better as a last season for the series rather than as a film for theaters. That way it could have been more polished on all three story-lines and a more successful closure to the brand.